UPDATED: Online Censorship Has Arrived – Here Are The Companies Behind It 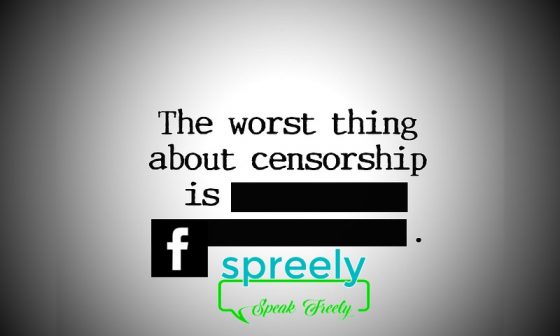 UPDATE, Thursday, October 11: Almost on cue, Facebook announced today that it had removed over 800 sites. According to reports, most were politically oriented. Facebook claims that its actions were “against behavior violations, not content violations.” Some of the sites, including ones managed by friends of mine, do not violate any kind of rules, to the extent that we even know what rules Facebook uses. I am highly skeptical but if there were “behavior violations,” then Facebook should explicitly explain what they were, perhaps with a warning so inadvertent violations can be fixed. But they don”t. And they change the rules all the time. There is absolutely no excuse for this. It looks very much more like Facebook is repeating the headline to this piece.

Right Wing News is very popular and had over 3 million followers on its Facebook page. No more. Sites with very good content, like NoisyRoom.net, which has been around for at least a decade, lost their Facebook pages. If one is trying to earn a living this way, I assure you, for conservatives, it is very difficult. We don’t have billionaire sugar daddies like George Soros to shower us with money like he does for the Left’s transparently propaganda pages, most of which read like something out of grade school. These random actions taken by Facebook without warning have destroyed businesses, some of which paid huge sums for Facebook ads. There is a justifiable cause for action here. I think a class action lawsuit to recover the millions in business lost is something worth looking into. This HAS TO STOP!

Many of us have witnessed and some have personally experienced what appears to be deliberate censorship of either original content or something we post on social media. Google, Facebook and Twitter have all denied such rampant bias, despite occasional leaks from those organizations that say otherwise — for example, Twitter’s so-called “shadow banning,” or the appalling treatment of former Google executive James Damore, who wrote an insightful but politically incorrect internal memo titled “Google’s Ideological Echo Chamber.” A story published at Breitbart Tech Wednesday, however, removes all doubt. Google intends to be a “good censor,” rather than an unbiased filter of online content it is required to be.

The memo is truly Orwellian. It calls the free speech principles created by the Internet, “utopian,” but then implies that this has to stop because “recent global events have undermined this utopian narrative.” As an example, it cites the 2016 election, which it claimed showed “the scope and potential impact of fake news on democracy,” where “Russian entities essentially [used] social media as an information weapon.” Trump won because of fake news and the Russians, in other words.

The memo called Trump’s accusation that Google searches favored Hillary Clinton a “conspiracy theory,” whereas independent research showed that Google did indeed favor Clinton over Trump and Bernie Sanders. The report concluded, “between May and November 2016, search results displayed in response to a wide range of election-related search terms were, on average, biased in Mrs. Clinton’s favor in all 10 search-result positions.”

To anyone in this business on the conservative side, it is apparent daily that Google already filters out content it disagrees with. For example, because it is a topic of research for me, I receive Google alerts on “Refugee Resettlement.” I wrote a popular book on the subject and have published widely-read, in-depth studies of the program, most recently a special report in three sections published by Capital Research Center, a DC think tank. The piece is titled Resettling Refugees: An International Agenda: Who’s Coming to America & Social and Economic Costs. The Center for Immigration Studies regularly publishes reports on the refugee program, as does NumbersUSA and the Federation for American Immigration Reform.

Do any of these serious reports or articles by myself or any of these well known, well-established, widely read organizations find their way into Google alerts? No, of course not. Instead, we get a litany of stories sympathetic to the refugee program and implicitly or explicitly critical of Trump policies, like today’s: Forced to close her resettlement office, this woman couldn’t turn one last refugee away; Psychological Needs of Resettled Refugee Women; AP Investigation: Deported parents can lose custody of kids. You get the drift. That’s just to name a few.

In early September, Facebook also announced it will be on the prowl for “fake news” in the midterms and beyond. It intends to set up a “war room” at headquarters. They will focus on, “Combating foreign interference, blocking and removing fake accounts from the site, decelerating the spread of misinformation and fake news, as well as increasing the level of transparency around political ads…”

What do you think Facebook is referring to when talks of stopping “misinformation and fake news…?” I guarantee you they are not talking about blocking CNN, Huffington Post, Salon, the Washington Post, the New York Times, or any of the other so-called “mainstream media” outlets that suppress critical news, publish deliberate misinformation and fake news every day. Facebook, Twitter, and YouTube banned Alex Jones, who sometimes exaggerates and produces click bait stories of dubious credibility. But Jones is a piker compared to those other outlets, that daily collude to produce a uniform media message on current issues that parrot Democrat talking points and leftist dog whistles. Their entire effort is to misinform and manipulate public opinion. If Jones should be banned then so should they.

But Facebook’s announcement comes on the heels of a secret memo penned by David Brock of Media Matters titled “Democracy Matters: Strategic Plan for Action.” Facebook’s intentions sound much more like what Media Matters proposes. In that memo, Brock says they will use Facebook, Twitter, and other social media:

Punished and halted? We have just been treated to weeks of unprecedented “media-fueled harassment campaigns that silence dissent and poison our national discourse…” in an effort to derail the Kavanaugh nomination. Who on earth does David Brock think he is?

The Left has many unseemly habits, and they have become uglier and uglier by the minute these days. I have a name for it: psychological terrorism. They harass. They silence dissent. They knowingly misinform, then physically attack their political opponents, accusing them of the things that they, the Left, do every day.

The Left has gone over the top to poison our national discourse and reduced political debate to infantile, kindergarten playground name calling. And their hyperbolic rhetoric has already turned some of their more unglued partisans like James Hodgkinson and Floyd Corkins into actual terrorists.

But true to form, unable to admit it, they double down and accuse us of what they do every day. I don’t know why anyone listens to them at all. This has to stop. The most important way to begin that change is to do what President Trump said Wednesday in Pennsylvania: you need to go out and vote Republican this November. And begin to Make America Great Again.