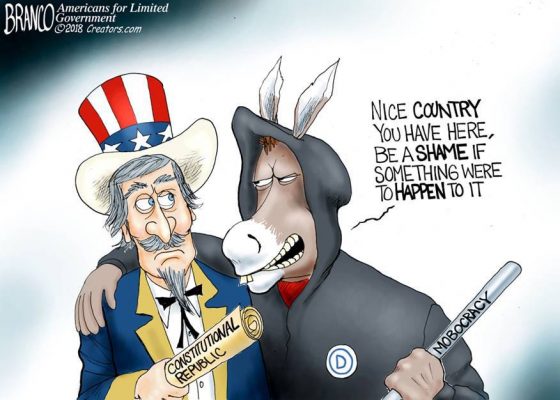 Welcome to the Twilight Zone.

Ever since the Kavanaugh hearings, Democrats have scrambled to characterize their vicious, underhanded tactics as “just politics.” And as usual, the pundits are punting. Everyone from CNN to Fox News decries the “lack of civility” in current political discourse, as though this were a bipartisan problem that both sides shared equal blame for. Democrats even blame President Trump for being crude, one radio talker even called him “cruel.” Thus, their anger and insane behavior is “justified.”

None of this Democrat narrative is true. In fact, it is the opposite. Democrats and the extreme Left (but I repeat myself), are simply doing what they always do when called out: doubling down on their behavior and trying to pass it off as legitimate.

Somehow, “crude” and “cruel” never applied to Bill Clinton’s rape, sexual abuse, and likely pedophilia. And while accusations against Kavanaugh, debunked by Blasey-Ford’s own “witnesses,” justifies angry mobs “tearing this sh*t down,” we get crickets from Democrats regarding much more credible sexual abuse allegations from two former girlfriends of DNC Deputy Chairman and current Minnesota Attorney General candidate Keith Ellison. This included a 2005 911 call, and most recently, allegations stemming from a 2016 incident. No confusion about when these events happened.

According to the luminaries of the Left, there is now a new Word-That-Cannot-Be-Spoken — the “M” word. On CNN a few days ago, moderator Brooke Baldwin interrupted Daily Beast columnist Matt Lewis when he characterized the protesters who chased Senator Ted Cruz (R-TX) out of a restaurant as “a mob.”

Baldwin: “Matt, Matt — a mob… Stop. Stop. A mob is what we saw in Charlottesville, Virginia, two Augusts ago.”

Lewis: “What about the people who were at the Supreme Court banging on the walls? What do you call that, civil protest?”

Mary Katherine Ham: “And if they were tea partiers we would call this a mob. C’mon. Let’s be serious.”

But Baldwin had set down the marker. The “M” word, like the “C” word, (for communist, which frankly is what most Democrats have become), is now verboten in polite DC company.

And Democrats are taking every opportunity to draw parallels between the kind of Tea Party protests we saw in 2010 with what the left is doing now.

But there is no comparison. Leftwing protests are routinely obscenity-laden, disrespectful, pompous, entitled, threatening, often unsanctioned and violent. Furthermore, they are usually highly-organized astroturf protests with paid protesters financed by extreme Left groups, unions and Democrat mega-donors like George Soros.

Tea Party and other similar groups never engage in the kind of ugly, obscene behavior that is a signature of almost all leftwing protests, and have never engaged in unprovoked violence. Their protests are orderly and meticulously follow the law – obtaining permits, staying within their allotted areas, and very diligently cleaning up after themselves.

Even the Charlottesville protests, where  Democrats falsely characterized Richard Spencer’s group as demonstrative of mainline conservatives rather than the fringe group it is, became violent only when leftwing protestors showed up without a permit, violated the boundaries of the parade route sanctioned by the city, and were unopposed by police when they attacked Spencer’s group. This is no defense of Spencer, but without the leftists, the protest would have gone on without incident. President Trump was vilified for simply observing that both sides engaged in violence.

But it was the Left who provoked it.

Obama set his Justice Department and the IRS against the American people in a full-throated effort to silence us while ramming his extremist agenda down our collective throats. When he refused to turn over records on the Fast and Furious gun-running scandal, responsible for at least one Border Patrol agent’s death and hundreds of Mexican deaths, Attorney General Eric Holder was the first AG ever declared in contempt of Congress. Lois Lerner’s IRS transcended all history in its abuse of law-abiding citizens.

The Obama administration was 1984 on steroids.

Vicious, over-the-top defamation, lawfare, and violence are central tactics in the Left’s political bag of tricks and have been for decades. The first time we saw Kavanaugh’s “search and destroy” tactic employed in confirmation hearings was with Justice Robert Bork, probably one of the most qualified jurists ever nominated to the Supreme Court. That was followed by the equally repulsive treatment of Justice Clarence Thomas.

You must also remember that this was, according to Democrats, a supposed age of “civility,” when, with the exception of a very few years, Democrats held a vice grip on both houses of Congress for over 60 years. At that time, GOP members of Congress were ignored, overlooked and disrespected by Democrats, while the GOP responded with “civility.” This is the kind of “civility” Hillary Clinton recently referred to when she said, “if we are fortunate enough to win back the House and or the Senate, that’s when civility can start again.”

Now we have to contend with daily assaults from the absolutely unglued Left; from top to bottom. Google executive Ken Norton tweeted, “Abolish the Senate.”

The Senate and Electoral College are both institutions of racism according to the latest leftist mantra. Ian Millhiser of Think Progress tweets, “The Constitution of the United States has failed.

The New York Times wonders aloud if Donald Trump is “a threat to democracy.” It is actually the Left that is a threat. Our nation is a constitutional republic, not a democracy. As the founders knew, democracy ultimately leads to mob rule. But the Left isn’t really talking about democracy, they are talking about socialism. Either way, they are the threat!

Democrats have a different word for “mob rule” too. They call it “direct democracy,” and hold up Egypt’s so-called “Arab Spring” as a perfect example of direct democracy in action. But the “Arab Spring” did not result in a democratically elected government. Egypt is a nation of 92 million people, of which a small proportion took part in the protests.

And what kind of “democratic protest” was it? Why don’t you ask CBS reporter Lara Logan, who was stripped, repeatedly raped, beaten and nearly scalped by dozens of “democratic protesters.” Crickets from the Left about that unsavory aspect of mob rule, excuse me, direct democracy. Instead, Lara Logan is marginalized for having the temerity to get herself gang raped by these budding “democrats.”

Today we live in an alternative universe, like something out of the Twilight Zone or its cheaper knockoff, The Outer Limits. Do you remember? The announcer says:

Civility can only reign when Democrats hold the levers of power. Getting just rewards for the losers they are guarantees nothing but constant “resistance” in the form of insane incivility. During the Kavanaugh hearings, Senator Lindsay Graham shouted directly at the Democrat senators “Boy, y’all want power. I hope you never get it.”

Truer words were never spoken. In their lust for power, Democrats have shown they will stoop to anything to have their way. President Trump recently said that if Democrats take power they will turn our nation into Venezuela.

It is beginning to look like that is actually what they want, Venezuelan Red Shirts and all.

UPDATED: Online Censorship Has Arrived – Here Are The Companies Behind It

Roast me, rant at me and flame me, but the truth will not change…

Pizza gate has been debunked and people still cling to the notion that it has a credible basis in reality. If the whole thing was true then where is the evidence.

There is no point in expecting politics to change the underlying nature of human beings. Most utopian experiments have (like communism) failed, as it is to dangerous to clump people together as some in the group and expect them to be jolly and happy because big brother says so. It is hard for large groups to co-operate together due to apathy, self interest/determination and personal boundries.

Like all humans at some point in their lives, some democrates and some republicans have fallen prey to the simple idea that the world would be great if it ran their way, if conditions were perfect then they would be happy and then the world would be great. Rather then adjust to reality to cope they expect reality to change to pander to their precious fragile ego. And do not forget to engage in needless debate. They remind me of drug addicts, politics is the opiate of the masses never mind religion, (I am taking licence with Stalins quote and Stalin was a murderous criminal, who I despise)

The illusion that politicans can solve the worlds ills is misleading. It takes a society of well adjusted individuals working together to acheive a well balanced society, and then is no guarantee that things with go well.